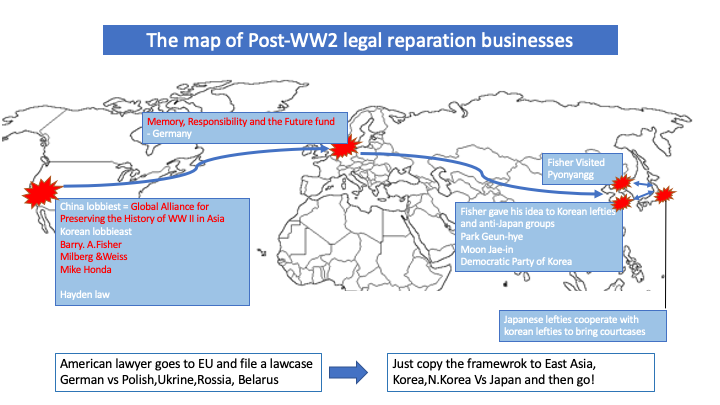 I had doubts long time why comfort woman issue was started in late 80`s such long distance from end of WW2. There was almost 50 years from 1945 to late of 1980`s. Japan has concluded Peace treaty with United nations in 1951, and following years concluded Peace treaties with countries not included in U.N such as RPC, and Korea and built diplomatic relations as well as after the war. Reparations has paid as in the form grant aid, government loan, technical support to the interest government at the time of treaty concluded especially in the case of South Asian countries as liquidation of war. Then why the issues came up again after such long time? that was my first and principle question.

Secondly what I have found and which is greatly shocked me was the fact a lot of Japanese lawyers were involved in legal cases of reparation against Japan. I really could not understand the reason why Japanese sue Japanese government. It is naturally understood if European Jew bring the incident and sue German government regarding forced labor or murder during the war. These Japanese lawyers are not from Korean or Chinese back ground may desire to payback their ancestors disadvantage or loss during the war to Japanese government, they are original Japanese may have grandfathers and elder relatives has experience of service to Japanese military during the war possibly.

Please see the map posted on top of the page, This is the answer to all my doubts and may be to your question. The key word is “Lawyer” or  “Human right lawyer”.  The network of this kind of leftist lawyer is exists and they has litigated similar legal cases in Europe, South east asia, and East Asia. They just copy the cases litigated in U.S or German and paste it to Japan. Their logic is simply as like Japan and German are defeated in WW II and war time government committed to war crime, they are bad, they have to pay.

I am so tired of these kind of logics…. in every war time people and government go insane because it is war, murder is a crime at normal time but honoured at the war time. This situation is same in every country. You need another war until you would win if you had defeated in last war and has been accused continuously and forever.

Even though German and Japan situation and history in WW II was completely different these lawyers ignore it and want to copy&paste no matter how the historical fact is. Forced labor was not exist in the same form of German has in Japan, very limited numbers and duration( Only during 1944 to 45), but they faked up the fact as for examples one Korean miners photo as proof of forced labor but the photo was taken far after the war and miner is Japanese, and broadcast testimony of old forced labor who actually found out not had been worked in the minor.

Gunkanjima (hashima) where used to be an island of mining. Korean workers has lived in the island among majority of Japanese worker in the area of 0.063㎢, population was 4022 at 1945. In this small and highly dense island was claimed as forced labor island by Korea just right after the island is listed in World heritage. It is true many Koreans had worked before 1945 as miner in the island but they came there with free will, they wanted to come to island for getting more paid than in Korea and actually they were paid more in island as only exchange of dangerous and hard work as same as in the way of Japanese workers worked and paid.

During the annexation of Korea, Korea as treated as a part of Japan. Koreans had a freedom of movement, in fact many Koreans has moved to Japan for better job and payment until around 1944 before control of the Japanese sea held by U.S navy. Even Japanese government at the time restricted Korean migration to Japan to controlling the number of migrant. Now The lawyers and Korean government claimed these migrants with free-will also as forced labor after over 70 years.

I am so confused about this kind of manipulation of history( it is faked so cheaply actually) and also worried greatly after 10 years most of the person who experienced the war time and able to testify the truth would pass away and only the media of their voices has left. On the other hand these Lawyers and groups are currently though to be an age of 60 to 80 mostly they are post-war generation educated in anti-war, regret of WW II under strong influence of communism and socialism. Is this conflicting will be eased after these 2 generations would fade away slowly or will pass down to next generations and continue?